Ken Gormley was installed as the 13th president of Duquesne University in July 2016. As president, he has emphasized the university's historic mission to foster ethical behavior and dialogue through a series of public events focused on civil discourse. Through his leadership, Duquesne has continued to rise as a top-tier national University.

In 2022, Gormley launched the public phase of IGNITE: Forging the Future, the University's most ambitious — and already most successful — capital campaign. That same year, Gormley also announced the largest gift in University history from alumnus Thomas R. Kline, one of the nation's most influential and highly regarded trial lawyers, which provides transformational support to Duquesne's 111-year-old law school. Duquesne recognized the gift by naming its law school the Thomas R. Kline School of Law of Duquesne University.

Among his numerous, forward-thinking initiatives, Gormley has created academic centers that address pressing issues of our time. He created a new common learning experience for undergraduate students, and has raised a higher standard for inclusion — including naming Duquesne's first Chief Diversity Officer. He raised funds for and built a new fieldhouse for athletics and has launched the university's proposed new College of Osteopathic Medicine — set to open its doors in 2024.  Gormley continues to bring major political figures, public officials, newsmakers and journalists to campus for special programs examining legal issues and commemorating key events in American history. These have included programs featuring U.S. Supreme Court justices Sandra Day O'Connor, Samuel Alito, Jr., Clarence Thomas, Antonin Scalia, and Justice Sonia Sotomayor. Gormley also organized the first "National Conference on the First Amendment," co-presented by the Pittsburgh Foundation in cooperation with the National Constitution Center.

Gormley previously served as professor of law before being named dean of the Duquesne University School of Law. He joined the faculty in 1994, after teaching at the University of Pittsburgh School of Law and engaging in private practice.

Gormley's work has earned him a national reputation as a highly respected constitutional scholar. In 1997, he published Archibald Cox: Conscience of a Nation (Perseus Books), the authorized biography of one of the leading lawyers and public servants of the 20th century. The Cox book was awarded the 1999 Bruce K. Gould Book Award for an outstanding publication relating to the law. In 2010, he published The Death of American Virtue: Clinton vs. Starr (Crown), a New York Times bestseller chronicling the scandals that nearly destroyed the Clinton presidency. Gormley's most recent non-fiction book, American Presidents and the Constitution: A Living History, was published by NYU Press in May 2016, and has received national acclaim. A two-volume paperback version was published in the fall of 2022, with a new chapter added on the Trump presidency.

In 2021, Gormley published his first novel, The Heiress of Pittsburgh (Sunbury Press), part legal thriller and part love letter to his hometown.

Gormley has testified in the United States Senate three times and has testified in the Pennsylvania Senate on state constitutional matters. A past president of the Allegheny County Bar Association, He was the first academic to hold that position in the organization's history.

From 1998-2001, Gormley served as mayor of Forest Hills, Pennsylvania, where he lives with his wife Laura. They have four children. 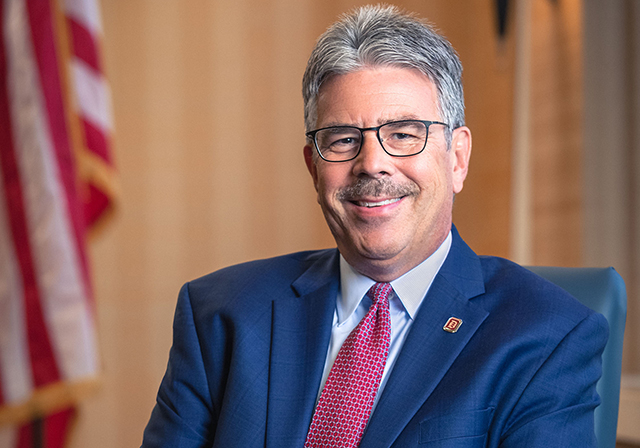 Duquesne University President Ken Gormley announced a $333 million goal for a comprehensive fundraising campaign on Saturday, Oct. 8, during a special event with University alumni, faculty, staff, students and other friends in its UPMC Cooper Fieldhouse on campus.

Thomas R. Kline, one of the nation's most influential and highly regarded trial lawyers, has committed $50 million to provide transformational support to Duquesne's 111-year-old law school. Duquesne University President Ken Gormley announced that the Pittsburgh university will recognize the gift by naming its law school the Thomas R. Kline School of Law of Duquesne University.

Launching a new College of Osteopathic Medicine at Duquesne University

The Presidents and the Constitution, Volume Two: From World War I to the Trump Era (Gormley, ed.), NYU Press (2022).

The Heiress of Pittsburgh, Sunbury Press (2021).

"Impeachment and the Independent Counsel: Collision in the Capitol" in The Clinton Presidency and the Constitutional System (Roseanna Perotti, ed.) at 163 (Texas A&M University Press, 2012).

Foreword to Chinese translation of The Court and the Constitution, "Archibald Cox" (Peking University Press 2006).

The Pennsylvania Legislative Reapportionment of 1991 (1994, Commw. of Pa. Press).

"Education as a Fundamental Right: Building a New Paradigm," 2 Forum on Public Policy 207 (University of Illinois) (2006).

"Racial Mind-Games and Reapportionment: When Can Race Be Considered (Legitimately) In Redistricting?" 4 University of Pennsylvania Journal of Constitutional Law 735 (2002).

"Monica Lewinsky, Impeachment, and the Death of the Independent Counsel Law: What Congress Can Salvage From the Wreckage - a Minimalist View," 60 Maryland L. Rev. 97 (2001).

"Bush 41's later in life, in letters," review of "All the Best, George Bush: My Life in Letters and Other Writings," WASHINGTON POST BOOK WORLD, June 2, 2013.

"A Response to ‘Dr. No:' The importance of saying ‘yes' to legal education in American," PENNSYLVANIA LAWYER Jan./Feb. 2012 at 22.

"Should Congress Reauthorize the Independent Counsel Law?" 78 Congressional Digest 144 (May, 1999).

"The Nixon Pardon at 40: Ford Looks Better Than Ever," The Wall Street Journal, Ken Gormley (with David Shribman), September 5, 2014.

"The Lesson of Watergate & Nixon's resignation," the Pittsburgh Tribune-Review, August 2, 2014.