Under the artistic direction of Dr. Caron Daley (Director of Choral Activities), the concert featured performances by the Duquesne Symphony Orchestra, Voices of Spirit, Pappert Chorale, Brass Ensemble, and Jazz Ensemble. Prior to the start of the concert, the Duquesne Flute Choir, under the direction of Daniel Parasky, performed in the Student Union Atrium for concert attendees as they entered the building.

"As musicians, we are coming back to life," said Daley. "For eighteen months, we made music in many creative and innovative ways, but the synergy that occurs when musicians play and sing together for a live audience can never be replaced. It was an absolute triumph for 200 student musicians of the Mary Pappert School of Music to perform Christmas at Duquesne for a live audience this year!"

Emceed by WQED's Anna Singer, the evening featured performances of a wide variety of genres and styles including music by Leroy Anderson, Felix Mendelssohn, Vince Guaraldi, Rosephanye Powell, and more. The event concluded with an audience sing-along arranged by Lucas Richman.

"This was truly an 'everything' concert," said junior Music Education major Noah Kilgus. "It was really special that all the ensembles had an opportunity to play together, rather than as an individual band or choir concert, especially since live performances are just starting to happen again."

In addition to the 400 in-person attendees, the concert was live-streamed, both in video and audio formats, reaching a combined worldwide audience of well over 800 people here in the United States, as well as in Brazil, Canada, China, Hong Kong, Kazakhstan, and more.

Dean David Allen Wehr said, "Since the angels first sang in the night sky over Bethlehem, music has been an integral part of our communal celebrations of the birth of Jesus Christ, and we are proud to have continued in that wonderful tradition."

Thank you to everyone who attended the event, both in person and online. We hope you all have a wonderful holiday season!

Photos from the concert can be viewed below: 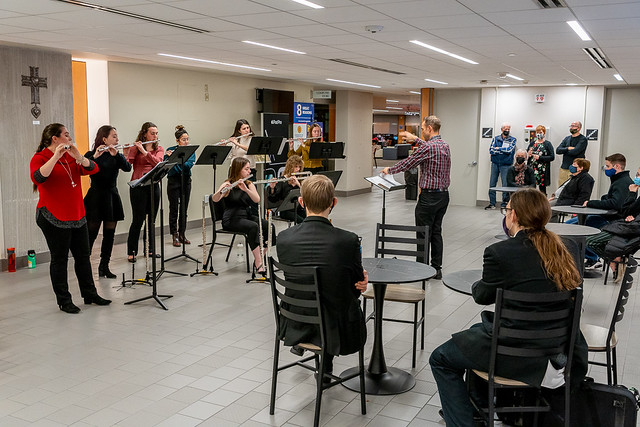