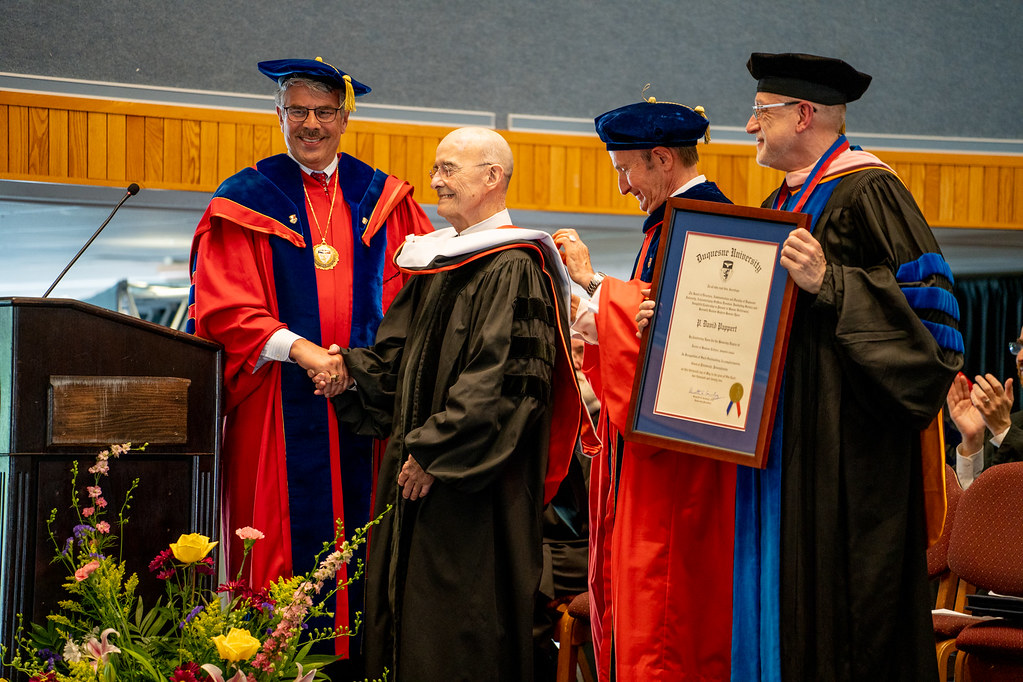 On Friday, May 13, long-time friend and benefactor of the Mary Pappert School of Music, P. David Pappert, was presented with an Honorary Doctorate in Humane Letters by Duquesne President Ken Gormley.

Dr. Pappert is the true embodiment of the Duquesne spirit, and he has a deep and rich history with our University. He received his bachelor's degree in English from Duquesne in 1960, served on the University's Board of Directors in many capacities (including Chairman), was inducted into the Century Club of Distinguished Duquesne University Alumni (along with his late wife Janet), and has received numerous other awards and accolades from the University. He and Janet also provided significant endowed financial support for the Mary Pappert School of Music (which is named in memory of David's mother), a lecture hall in the Bayer Learning Center, and various other initiatives benefitting students. In addition, Dr. Pappert has been a long-time supporter of the annual Music on the Bluff chamber music series, directed by Dean David Allen Wehr.

Wehr and former Dean Dr. Edward Kocher have both been highly involved with Dr. Pappert over the last two decades and were on hand to present the diploma and doctoral hood as President Gormley conferred the degree. "It was truly an honor for me, both in my role as Dean and as Artistic Director of the Bluff series, to be a part of this occasion. I can't think of anyone who deserves this honor more than David Pappert," said Wehr.

Seventy-two students officially graduated at the ceremony. Dr. Rachel Whitcomb, Associate Dean and Associate Professor of Music Education, announced each student's name and future plans as they crossed the stage in front of an audience of nearly 500 friends and family members. President Gormley officially conferred their degrees and welcomed them into the distinguished family of Duquesne alumni. Graduating senior Michael Kirk led the audience in the singing of the National Anthem and the Alma Mater, both of which were newly arranged by Garrett Hoffman, another 2022 graduate.

"We're so proud of each and every one of our graduates because we know just how much hard work and sacrifice it takes to complete our programs," said Wehr. "We have a rock star faculty that, in addition to being teachers, are accomplished, award-winning musicians who are very much active in all areas of the music industry. They know what it takes to make it, and they bring that knowledge and experience to the classroom and studio. We are very confident that they are equipped with the skills that position them for successful careers."