There are two wind ensembles available for students at the Mary Pappert School of Music—the Wind Symphony and the Symphony Band. Using the player pool concept, the ensemble performs music ranging from works requiring as few as 8 players to as many as 45. Flexible instrumentation provides members with a variety of responsibilities, challenges, and playing experiences.

The Wind Symphony is composed of the most outstanding wind, brass, and percussion students in the Mary Pappert School of Music. The membership of this ensemble is comprised of approximately half upper class undergraduate students and half graduate student performers. The Wind Symphony has emerged into a position of significant national visibility having received numerous invitations by audition to perform for prestigious music conferences, including the CBDNA (College Band Directors National Association) Golden Anniversary Convention in Kansas City and the MENC (now NAfME) National Convention held in Washington, DC with Karel Husa, guest conductor.

In addition to performances for major musical conventions, the Wind Symphony has been a featured ensemble at four separate Eastern Division conferences of CBDNA and MENC and three PMEA (Pennsylvania Music Educators Conference) conferences. In 2004, the Wind Symphony made its Carnegie Hall Debut in New York City. The Wind Symphony is continually active in commissioning new works by America's leading composers, presenting numerous premieres, and hosting on-campus visits of Emmy- and Pulitzer Prize-winning guest composers ranging from Norman Dello Joio, Morten Gould and Vincent Persichetti to Michael Daugherty and David Maslanka. A vast array of renowned conductors and soloists have also appeared as guests with the ensemble.

The Symphony Band is selected by audition from the finest performers on campus. Although most members are music majors, students studying in other disciplines may qualify for this ensemble. The Symphony Band fosters the highest standards while offering it's members an opportunity to expand their technical, intellectual, and musical horizons through study and performances of the cornerstone works for wind band as well as more recent works by living composers. Members of the Symphony Band are provided the opportunity share in the excitement of the creative process to broaden their musical experiences. 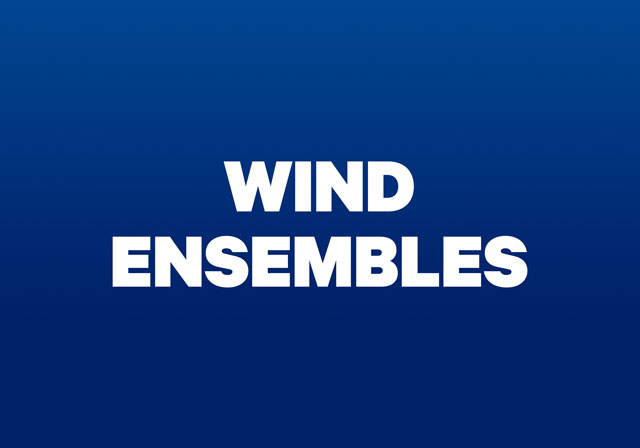